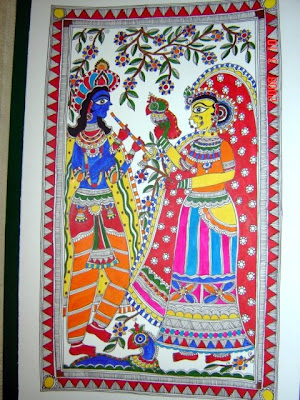 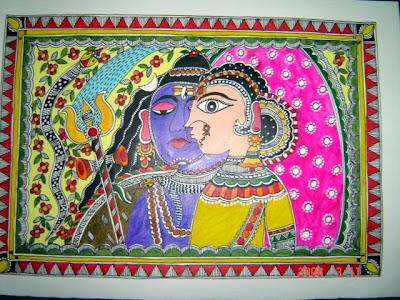 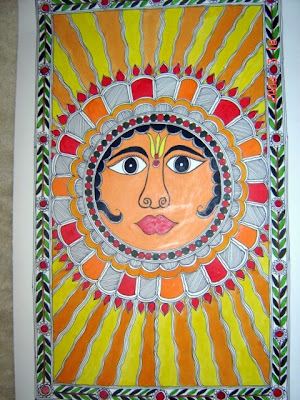 Posted by Vidushini Prasad at 8:43 AM No comments: 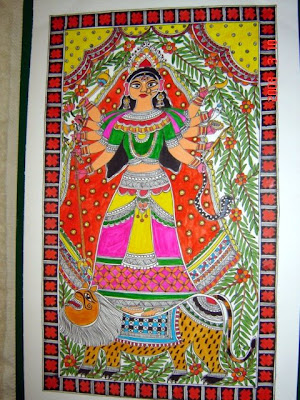 Madhubani painting has been done traditionally by the women of villages around the present town of Madhubani (the literal meaning of which is forests of honey) and other areas of Mithila. The painting was traditionally done on freshly plastered mud wall of huts, but now it is also done on cloth, hand-made paper and canvas .
As Madhubani painting has remained confined to a region and the skills have been passed from mother to daughter on through centuries, the content and the style have largely remained the same. Many painters these days have developed their style and painting on different themes and are trying to contemporise this art.
Madhubani paintings also use two dimensional imagery, and the colors used are derived from plants. nowadays many painters use artificial colors like poster, acrylic and oil colors as their medium.
Madhubani paintings mostly depict nature and Hindu religious motifs, and the themes generally revolve around Hindu deities like Krishna, Ram, Shiva, Durga, Lakshmi, Vishnu and Saraswati. Natural objects like the sun, the moon, are also widely painted, along with scenes from the royal court and social events like weddings. Generally no space is left empty; the gaps are filled by paintings of flowers, animals, birds, and even geometric designs.
Posted by Vidushini Prasad at 7:53 AM No comments: