Tales of water told in art

Tales of water told in art Dotted fish swim across a bandhni dupatta, aquatic plants grace block-printed stoles, aquamarine gems glint in the sunlight and brighten the colourful cluster of India cork handicrafts. The third edition of Annual Handmade Collective by A Hundred Hands at the Bhau Daji Lad Museum (ongoing till January 14) followed the theme is water. Where preachy talks and didactic monologue may fail, some of the artists and artisans participating the exhibit have shown both through the use of motifs and the way in which they have cut down on water usage in their work.
Shubham Chhipa of Gopal Handprints, who hails from Jaipur, says that conserving water is even more important to him than achieving the perfect white in his handblock prints. “We recycle the water we use to wash the clothes after they have been dyed,” he explains. “Usually, the same dye is used twice a week and we keep the water aside to use for both washes along with leftover dye.”
Hailing from the outskirts of Bhuj, Sulaiman Khatri has also taken to using dyes that set easily as opposed to ones that require more washes for his bandhini brand Ababil. In Bengal, Rubi and Arup Rakshit of MG Gramodyog Sewa Sansthan, supply their muslin and jamdani weavers with rain-fed, short staple desi cotton instead of the water and fertiliser-intensive BT cotton. “Cloth from the latter has traces of chemicals, even after many washes. Desi cotton requires less water during the weaving process,” explains Arup. 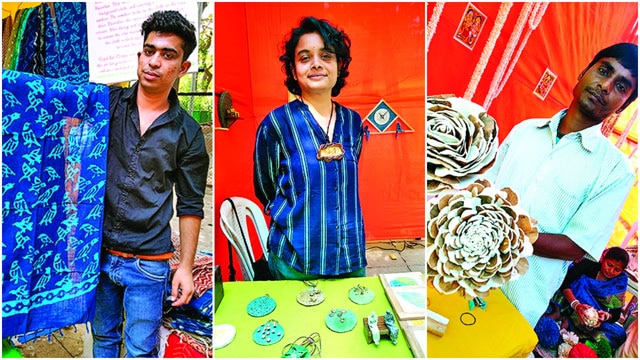 (Shubham Chhipa of Gopal Hand Prints; Preeti from Aranya Earthcrafts; sholapith artist Gobindo Haldar)
While Khatri, Chhipa and Arup work with cloth, Preeti, who helms Aaranya Earthcrafts works with papier mache. A green pendant holds bronze lotus flowers and leaves, another in deep aquamarine looks like a lotus stem dotted with tiny bronze mushrooms. As her inspiration comes from nature, it was easy for her to rustle up artefacts on the theme of water. “We use the same water for soaking the paper, then the gond and then the mitti, as opposed to throwing it away each time,” explains the artist. “This takes more time, but the sequence of paper-gond-mitti remains the same.”
With just a bit of improvisation, the artistes show that saving water is not just possible but easy.

One of the more colourful shops at the exhibition is Gobindo Haldar’s sholapith shop. Hailing from a village on the outskirts of Kolkata, Haldar’s one of the few remaining exponents of art to use this spongey water plant growing in marshy land in Orissa, Assam and Bengal. Thanks to less intricate and more durable substitutes like plastic flowers and thermocole, Haldar finds his business endangered. “Once the wedding season used to see booming for shola artists since we supplied most of the decor. However, today, we struggle through the winter and wait for puja seasons,” laments Haldar, who has come to Mumbai with his colourful shola artwork with borrowed money and high hopes for buyers and wholesale tie-ups.

Source: https://www.dnaindia.com/just-before-monday/report-tales-of-water-told-in-art-2707219
Posted by Vidushini Prasad at 12:04 AM No comments:

Patna roads get a makeover: Mithila and other art forms adorn the streets of the historical city


Patna, one of the oldest continuously inhabited place in the world, a centre of culture and once the greatest city on earth, as described by Megasthenes (the Greek ambassador to India), started losing its glory in last few decades. Because of the increase in population and loose administration, the city was falling into disarray. According to the 2011 census, approximately 1.68 million people reside in Patna which leads to chaotic traffic, low-quality lifestyle and unimaginable garbage.
Around 900 metric tonnes of garbage is generated in the city daily. Patna also stands high when it comes to dust. It was ranked 262 in cleanliness in India (According to Swachh Survekshan 2017 Rankings).
The above statistics are some of the reasons that Patna needs to give cleanliness a priority. Realising the same, Patna Municipal Corporation started a number of initiatives to eradicate the evil of dirtiness and give the people of Patna the best possible living experience.

Door to Door garbage collection, waste management plant to produce energy from the waste, re-colouring of road dividers, footpaths, golambers, etc are some of them. Adding up to the list, painting of numerous location of Patna with Mithila and other art forms is a great initiative to rejuvenate our city and turn it into a beautiful place.

Yes, you heard it right more than 30 locations around the historical city of Patna is getting a makeover by cleaning, revamping and painting the different areas. The initiative has been taken by Patna Municipal Corporation to turn the city into a clean and beautiful place. The project has been going on since last three months and is estimated to be completed soon. More than ten teams of over 500 people have been given the responsibility to complete the task. Some of these painters are professionals like artists who are invited from Madhubani whereas a large number of these artists are students, studying in Patna Art College.

“The project is aimed to eradicate the habit of people who urinate here and there, and change their mentality to keep our city clean and healthy” – Vishal Mishra, artist.
The paintings depict many religious and historical events related to Bihar like wedding of Hindu Lord Ram and Sita, the tenth Sikh Guru, Guru Gobind Singh who was born in Patna and many more. Apart from that, these wall paintings also carry message of cleanliness in pictorial forms. These paintings encourage the citizens of the city to adopt a clean and non-polluting way of living and to keep their surroundings clean.

The initiative of painting the city with Mithila and other art forms has got a very good response from the people of Patna. It has become a selfie spot. You can find people taking selfies with the wall and uploading it into the different social media platforms with pride and joy. Better late than never, we must appreciate the great initiative of Patna Municipal Corporation and hope that our city will very soon be transformed into a kind of paradise.

While the administration has given us these beautiful walls around the city, the responsibility of keeping these walls this way lies upon us, the general public of Patna. We need to be more sincere towards cleanliness and must let go of the habit of littering here and there and spitting pan or gutkha on the walls. Public urination continues to be a menace in the city. While the city administration needs to increase the number of public toilets to fight this menace, the people too will have to change and use the available facilities. We hope that the beauty and cleanliness of this city will last forever with the joint efforts of the administration and the public.
Note: Source Article by Satyam Kumar and published on patnabeats.com.
Posted by Vidushini Prasad at 8:03 PM No comments: 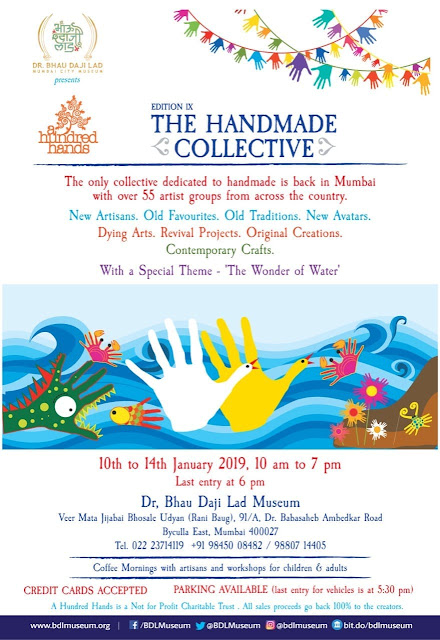 Posted by Vidushini Prasad at 11:03 PM No comments:

Some Photos from the Kochi event 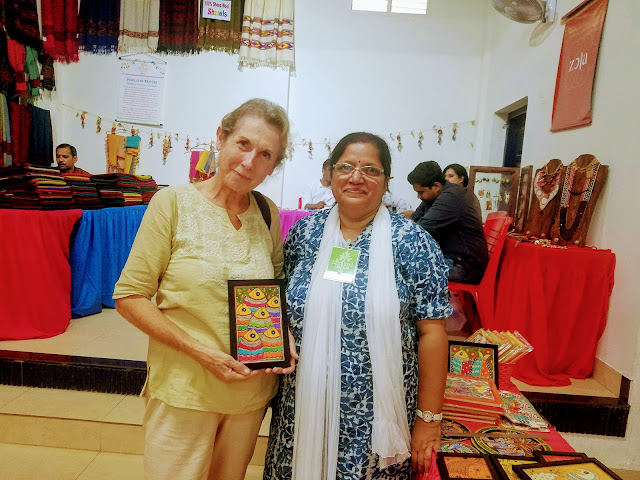 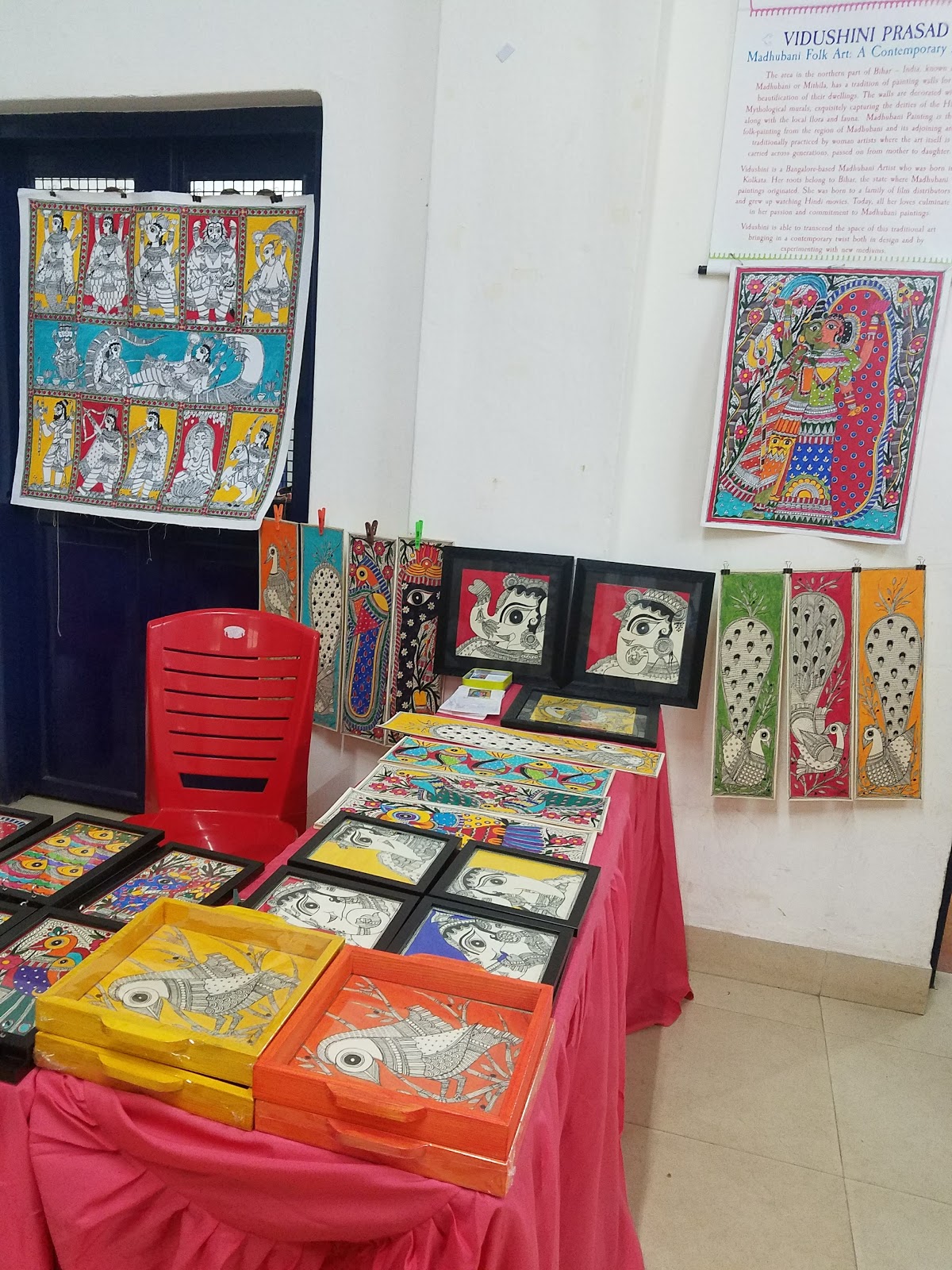 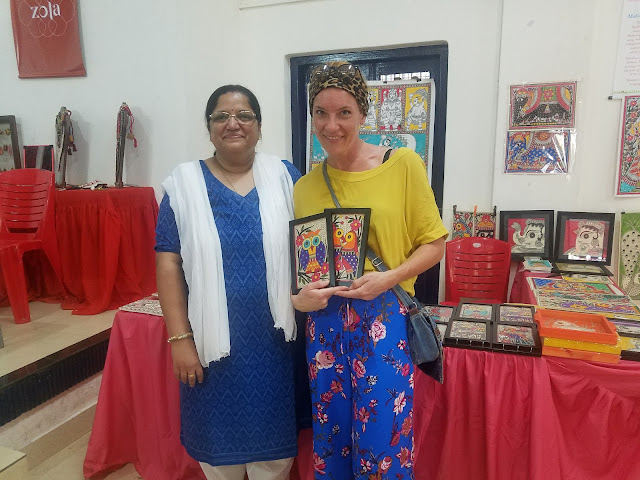 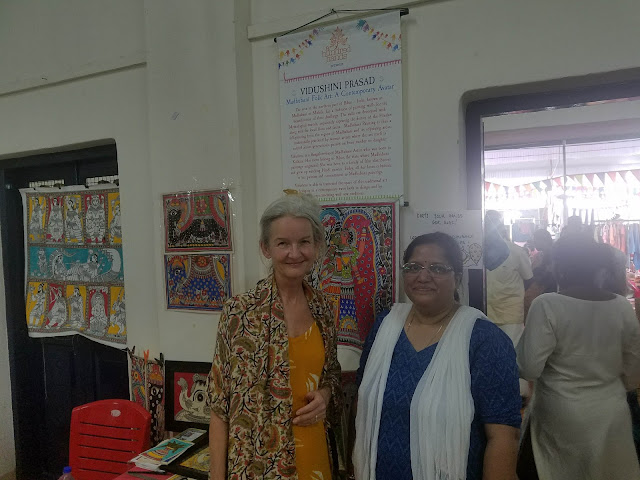 Posted by Vidushini Prasad at 11:09 PM No comments: