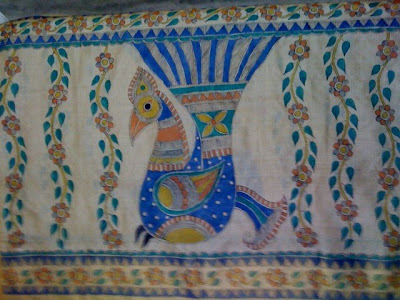 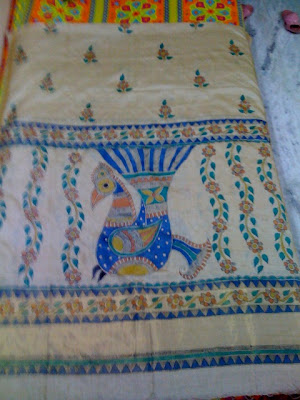 Posted by Vidushini Prasad at 7:21 PM No comments: 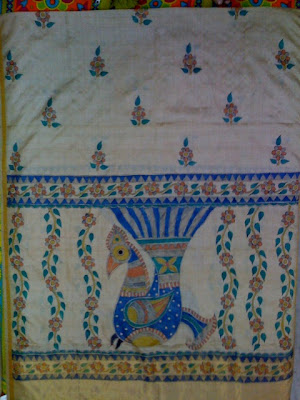 15 of my new paintings listed on Novica

'The Powerful Goddess'
Fierce and fearless, Durga is the mother goddess in the Hindu pantheon, empowered by all gods to slay the nefarious buffalo-demon and establish peace in three worlds. According to legend she was created for this purpose out of flames issued from the mouths of Brahma, Vishnu, Shiva, and the lesser gods. She was born fully-grown and beautiful; nevertheless, she presents a menacing form to her enemies
Posted by Vidushini Prasad at 7:41 PM No comments:

I found a list of books on Madhubani paintings or books having references to this art form from http://www.vl-site.org/india/mithila/books.html

Brown, Carolyn Henning, "Contested Meanings: Tantra and the Poetics of Mithila Art," American Ethnologist 23, 4 (November 1996), 717-37.
[All of the listed titles can be read more profitably in relation to the proposals put forward by Professor Brown.]

Jain, Jyotindra, Ganga Devi: Tradition and Expression in Mithila Painting (Ahmedabad, India: Mapin Publishing Pvt Ltd., in association with The Mithila Museum, Niigata, Japan, 1997).
[A fine book on a leading artist who practiced what is sometimes called the Kayastha style of Madhubani painting.]

Vequaud, Yves, The Women Painters of Mithila (London: Thames and Hudson, 1977).
[This is a book that contributed to and then reflected the worldwide popularity of Madhubani painting.]
Posted by Vidushini Prasad at 11:12 PM No comments:

A short documentary on Madhubani painting

Posted by Vidushini Prasad at 9:20 PM No comments:

Description as written on Wikipedia--Ardhanareshwar represents synthesis of masculine and feminine energies. The Ardhanari form also illustrates how the female principle of God, Shakti, is inseparable from the male principle of God, Shiva. Ardhanari in iconography is depicted as half-male and half-female, split down the middle. The best sculptural depictions of Shiva as Ardhanari are to be seen in the sensuous Chola dynasty bronzes and the sculptures at Ellora and Elephanta. 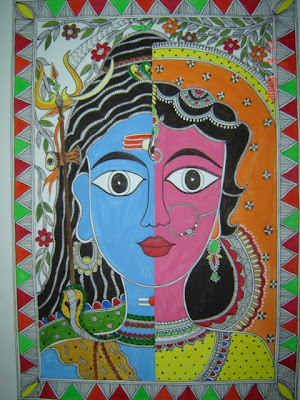 Posted by Vidushini Prasad at 4:02 AM No comments: