My Interview in Indian Express, Bangalore

By Akshatha Shetty / ENS - BANGALORE
18th July 2012 09:20 AM
Characterised by catchy geometric patterns and religious motifs, Madhubani (Mithila) style of painting is soaked in mythology and antiquity. However, the exact origins of these paintings are shrouded in mystery. With its roots in Madhubani region, these folk paintings were largely practised by women artists and the tradition was passed on from mother to daughter for generations. “Though I have not had any formal training, it was not difficult for me learn this particular art form. After all, I have inherited it from my culture, and I take great pride in it. It brings beauty and peace, and gives inspiration to do something new. It also helps in nurturing one’s creative skills,” said Bangalore-based artist Vidushini Prasad who exhibited her Madhubani paintings in the city recently. In conversation with City Express, the artist shares her views on preserving traditional art forms.
Tell us about the history of Madhubani paintings.
Madhubani Painting  was generally used for decorating mud walls during festivals, weddings and other occasions. Apparently, while inspecting the damage after a major Bihar earthquake in 1934, William Archer, the then collector stumbled upon wall and floor paintings for the first time and managed to photograph them. It was widely reported by several publications. But it was only in 1966 when the region experienced major draught, that the All India Handicrafts Board sent an artist, Baskar Kulkarni, to Madhubani to encourage women to make these paintings on paper (instead of walls), so that they could generate some income from this art form. Some of the greatest artists of this art form include Sita Devi and Ganga Devi.
What distinguishes this style form other traditional art forms?
Madhubani is different from other forms of painting in many ways. The figures are two-dimensional in nature. The features usually include sharp noses with bulging eyes. Double lines are used to draw figures, flora and fauna. Also, the designs are filled with intricate lines and no shading is required. There is an extensive use of geometric designs. Typically, no empty spaces are left in this style and are usually filled with leaves and flowers.
Do you think Indian art forms are on the brink of extinction today?
Yes, some art forms are certainly on the brink of extinction but they can be revived if artists, art galleries and the government work together. Today, several initiatives have emerged in the country that may help mitigate the challenges associated with preservation of ethnic art. Most of the artists think that practising traditional art is only for self-sustenance and meant for those whose livelihood is dependent on it. Anyone can practise traditional art forms and preserve this art by sharing their knowledge with the next generation. For example, Manjusha and Patna Kalam are two art forms which are almost on the brink of extinction. Manjusha originated in the 6th Century and has its origin in Bhagalpur, a district in Bihar. In this style of painting, humans are shown in the form of English letter ‘X’ with limbs drawn with linear and uniform bold lines. Patna Kalam, is an offshoot of Madhubani painting which also faces a similar situation today.
With respect to lines, contours and colours, could you describe some of the distinctive features of folk art forms?
The sketches are double lined and then filled with intricate lines and designs. The figures are two dimensional in nature. Traditionally natural colours were used. However, nowadays, artists are using artificial colours like poster, acrylic and water. The main colours used are red, green, orange, yellow, blue, brown and black.
Indian art is generally associated with spirituality and mysticism. Your thoughts on the same?
Most of the Indian art forms are usually spiritual in nature. In Madhubani, people would adorn walls and floors with these paintings during festivals and other rituals with the belief that God visits them on these occasions. The traditional Madhubani art form has motifs that symbolise fertility and was used to adorn the walls of Kohbar, nuptial chamber, where all rituals were performed during a wedding ceremony.
How important is the conservation of Indian tribal art forms?
It is absolutely important that we prevent Indian tribal art forms from getting extinct. After all, it is directly linked to the protection of our culture and heritage, more so for the coming generations. Art form conservation is of crucial importance for India.
Any future projects we need to look forward to?
I am working on several projects simultaneously. One of them includes creating new themes to showcase in the annual bazaar of ‘A Hundred hands’. It is a nonprofit trust whose mission is to help those directly involved in the creation of handmade art, crafts and homemade food, to earn a livelihood.
Posted by Vidushini Prasad at 7:44 PM No comments:

Exhibition of Some of My Work at Renaissance Gallerie, Bangalore

Posted by Vidushini Prasad at 10:10 AM No comments:

Exhibition of My Madhubani Paintings in Bangalore


Some Photographs from the Exhibition 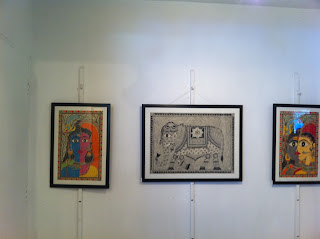 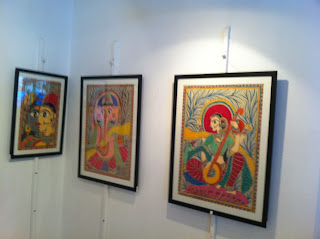 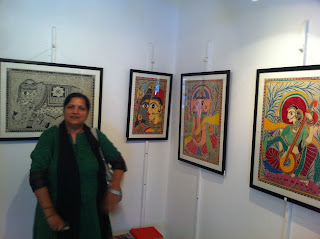 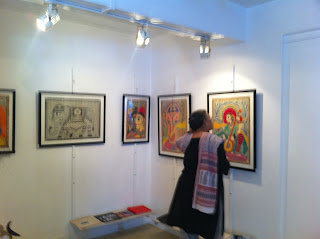 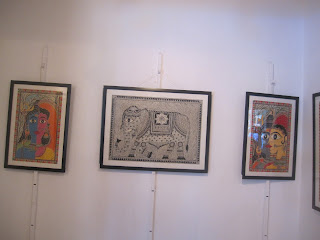 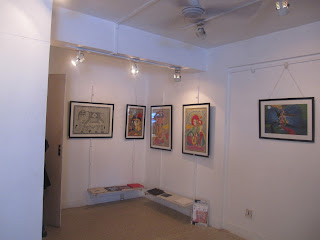